Via Inside Carolina which has a great piece about the ins and outs of preparing the equipment for the coming football season. Among the pictures is the white helmet which has been talked about but as far as I know not totally confirmed UNC would use them. 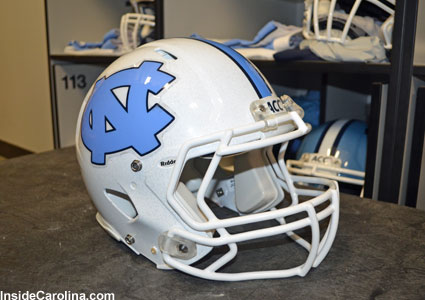 According to IC this helmet will be used at least once.

Here's a prototype for the white helmet that North Carolina will wear at least once in 2012. The finished product will include standard width stripes down the middle (one-inch between two 1/2-inch) and there's a possibility that the face mask will be navy blue instead of white. The equipment staff toys around with helmet and uniform options throughout the year. There are roughly 10 spec helmets on a locker shelf, including a pair of black helmets.

The rumor a few months back was the white helmets would make an appearance against Georgia Tech on November 10th with the possibility of UNC marketing it as a "white-out" game. No official confirmation on that nor on the use of the other special helmets that have been seen over the years. My guess is UNC won't reveal more than one special look helmet in a season but given the postseason ban, hyping other games up with some new uniforms would not be surprising.