T.J. Thorpe Out With Foot Injury

Share All sharing options for: T.J. Thorpe Out With Foot Injury 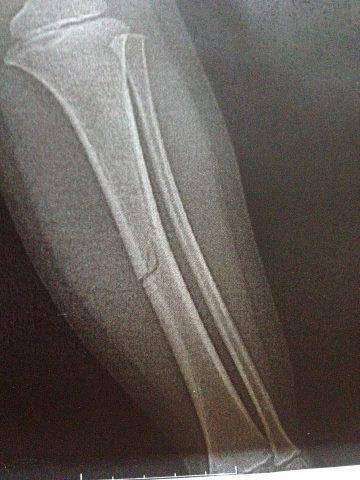 Okay, that's not T.J. Thorpe's foot or leg. That is an X-ray of my three year old son's left leg. In a bout of horseplay his six year old sister knocked him down and landed on top of him. The result was a fracture of his tibia which has him laid up for the foreseeable future. As a result he will be redshirting the 2012 season.

Meanwhile at UNC training camp, primary kick returner T.J. Thorpe is, according to IC, out for an extended period of time with a serious foot injury. This is bad news since Thorpe was All-ACC honorable mention and had been named to the watchlist for the Johnny Rogers Award which is given to the nation's top returner. Thorpe was also listed second on the depth chart at receiver provided some needed depth there, especially with Todd Harrelson leaving the team.

UNC has not officially confirmed the injury and given Larry Fedora's penchant for secrecy it may not happen at all. On the bright side, there is plenty of time for the injury to heal. Even if it ends up being a 4-6 weeks recovery period, Thorpe can still be available for the bulk of the schedule.