Share All sharing options for: The Third Game Curse and Statistical Noise

A tweet was bouncing around yesterday with a strange fact about Carolina basketball under Roy Williams:

Under Roy WIlliams, UNC is 3-5 in both the 3rd and 4th games of the ACC schedule. They have a winning record in all others. #oddtrends

This piqued my interest. Is there a particular reason UNC is more likely to drop its third or fourth game of the season? I had a few extra minutes, so I made a matrix of the Heels' ACC wins and losses for the last eight years. The results:

In the above, a win is a 1 and a loss a 0, wile a blue background is home and and a white away. The end result pretty much shows there's nothing of importance here. UNC has played their third game on the road slightly more often, but evenly splits the fourth game. Also, although not shown, the fact that some years there are December games and others not means the third game typically doesn't even consistently fall on a weekend or a week day. The simple truth is that with a team that's won about 70% of their ACC games under Williams, more often than not they're going to win six of any subset of eight games, and sure enough, a histogram points that out: 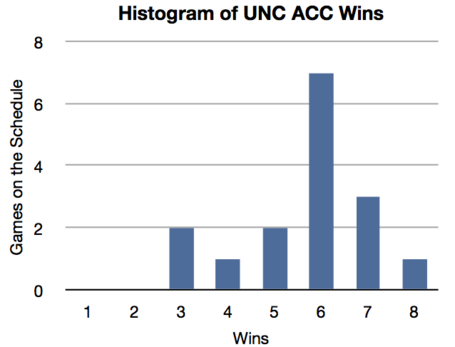 UNC wins one more game in either the third or fourth week, and that's pretty close to a perfect bell curve. UNC's losses in third and fourth week are nothing more than noise, and Carolina has just a god chance of beating FSU today as they would in any week of the year. More on that later.