Share All sharing options for: Big Losses and National Championships

After UNC's implosion against Florida State, everywhere you looked someone was spouting off on how "No NCAA champion has lost by more that [blank] since [blank] in [blank]. What filled those [blanks] was basically determined by how lazy the author was. Connecticut's loss by 16 in 2004 to Georgia Tech was the most common especially by folks who ignored the 2011 season where the same Huskies lost by 17. The more diligent folks went all the way back to Carolina's loss by 26, also against Georgia Tech, in 1993. Finally, someone went and just listed every worst loss of every national championship, which SBNation promptly repurposed to make the same point everyone's been making.

In fact, all of this championship record-scouring tells us nothing. Good teams losing by 33 points is an extremely rare event in college basketball. After all, no team has won the national championship the same year their coach hit the lottery, but if Roy Williams wins the Powerball next week, folks wouldn't suddenly write off the Tar Heel's chances. What you have to ask yourself is, how bad were the losses for the good teams that didn't win the national championship?

For the purposes of this this experiment, we'll define "good teams" as 1 or 2 seeds, because that is where the local bracketologist had UNC after the FSU loss. (Aside: This is the first time I've ever found bracketology useful for anything. I expect it might also be the last.) Here's a histogram of all the losses from 1 and 2 seeds and the national champions, going back to 2003, the first year of Ken Pomeroy's data: 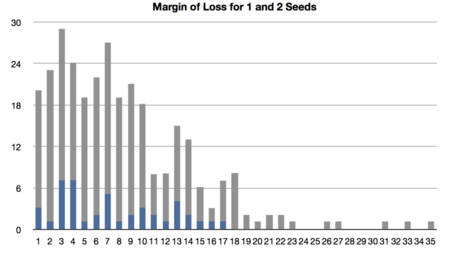 (Blue are losses by the eventual champion, gray total losses by champions, and 1 and 2 seeds.)

The first surprise is that yes, 1 and 2 seeds occasionally lose horribly. The worst loss is Michigan State's 35-point loss to North Carolina in the fall of the 2008-2009 season. That Spartan team would go all the way to the national championship game, before losing again to... North Carolina. Louisville lost by 33 that same season to Notre Dame, and were knocked out in the Elite Eight by the same Michigan State team. Texas has the next worst loss, by 31 to Duke in the 2005-2006 season; they would make it to the Elite Eight as well, one round further than the Blue Devils. (Both teams would lose to LSU.)

All in all, eleven 1 or 2 seeds have lost by 20 or more points since 2003, and none of them have won the national championship. But last season you could say the same thing about teams that lost by 17 points, until Connecticut user that particular apple cart. Now, a team who has lost by 17 is more likely to win the national championship than a team that lost by 2. What does it mean? Not much. Margin of defeat just doesn't play a large role.

In fact, you can look at the same data and come to the conclusion that not getting stomped could be equally detrimental to your championship hopes. Here's a scatterplot of the number of losses for each team and their largest margin of defeat: 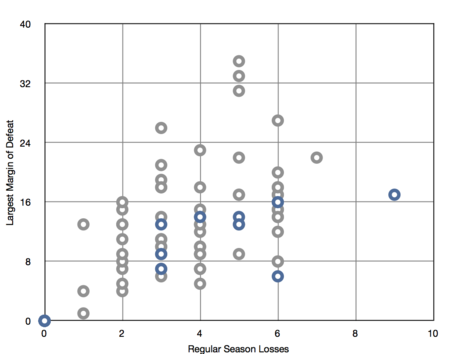 (That data point at 0,0 shouldn't be blue, by the way. That's St. Joseph's, who didn't win the title. Some software bug is changing its color.)

Only three teams in nine years have won national championships without getting beat by at least 10 points – North Carolina in 2009, Kansas in 2008, and Florida in 2006. Meanwhile, plenty of teams has had smaller defeats, as well as lower average margin of defeat, and not cut down the nets.

So you can put the Florida State loss out of your mind; it's not going to hold Carolina back come March. The succession of injured shooting guards, however, is a bit more worrisome.