Share All sharing options for: NC State and Their Giant Paper Faces

UNC travels to Raleigh tomorrow to meet the Wolfpack, and as far as I can tell, this may be their first exposure to the latest trend plaguing college basketball audiences – the giant paper face. I don't recall seeing them in Raleigh prior to this season, and I haven't noticed them at any other ACC games the Heels have played. And I'd hope I would, because they're annoying.

The big faces aren't a new thing, exactly. Shane Ryan of Tobacco Road Blues wrote a brief history for Grantland; the practice began at San Diego State in 2002, when a fan got the idea from the movie BASEketball, of all places. From there, the trend jumped to Marquette and when their coach Tom Crean left for Indiana he brought the cardboard heads along. I assume since N.C. State slavishly copies a lot of Indiana's iconography – ever since they redid the floors in a maple style I always confuse it with Assembly Hall – the Wolfpack picked it up from there. Indiana's athletic department provides theirs, at seventy dollars apiece, and tasks interns with collecting them after every game. I was curious as to whether State's are similarly funded.

On the one hand, the heads the Wolfpack use, at least in the picture above, are pretty jejune. There's Gary Busey, Rowan Atkinson, Voldemort, Urkel, Zach Galifianakis (an N.C. State dropout [*]), and an elderly man who shockingly isn't William Allen White. The one that has generated the most excitement isn't in the above picture – bald Britney Spears. I can see that being an athletic department approved list.

It doesn't appear to be, however. There's a Facebook group and an e-mail for the students who coordinate these things. (Don't bother trolling, as submissions for the UNC game are closed.) I'd expect to see a giant Karl Hess in the stands, but don't really see how distracting that would be. It's one of those ideas that fans love while the people actually playing the game couldn't care less about.

As for my general opinion of the giant heads, I find them slightly less embarrassing than the spinning spirals Wake is fond of, or the thundersticks NBA teams are fond of. But in general, it's just another way to make up for soft crowd noise and take the fans behind you out of the game. It has a greater effect on TV cameras and press photos than the players on the line; I expect that were I to run the numbers at the end of the season I'd see the same effect I saw with the Cameron Crazies – nothing.

Beside, nothing is ever going to top the guy from Alabama; we should all stop trying now. 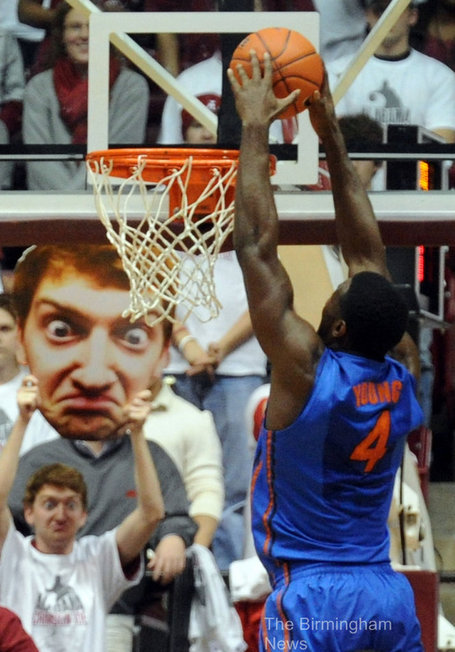