I've been a little slack about posting conference-only stats this season compared to years past, but with three games remaining, I think this might shed a little light onto how the conference races will finish out. Not so much at the top, where the UNC-Duke-Florida State battle is almost assured to come down to the final game in Cameron at this point, but the other nine teams; there are she weaknesses that aren't readily apparent. First, the offense: 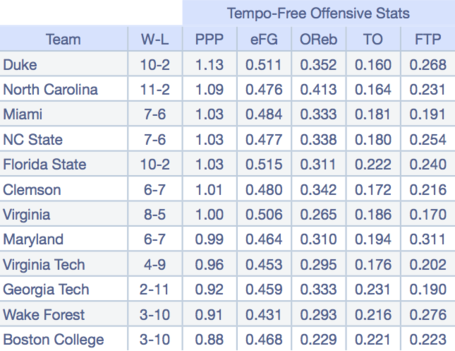 UNC's offense has really picked up since the last time I looked at (but didn't post) these numbers at midseason. Then, the Tar Heels trailed both Duke and Florida State; since they've upped their average by 4 points per 100 possessions. Oddly enough, their shooting has really improved, but their turnovers have dropped and their free throw shooting (!) has improved. It's still awful, considering how good the team is at drawing fouls, but it's better. Virginia, meanwhile has been spinning its wheels; their shooting has gotten a lot better, but that second-worst in the conference offensive rebounding number? It was significantly higher (0.309) five games ago. This team really, really, misses Assane Sene. UNC should absolutely crush the offensive boards today.

I'd also note the performances of Miami and Clemson. Miami has surged in offensive production since midseason, when they were ranked 6th in points per possession. For the Hurricanes, the key has been improved rebounding and a slightly better job of not turning the ball over. Clemson meanwhile has seen their offensive production drop, but both their shooting and rebounding improved. Compound that with their defensive performances and schedules, and I'd look for these two teams to dramatically improve their postseason chances. One or both could even knock off the Seminoles, especially the Hurricanes, who get them today at home after a draining Duke game on Thursday.

Meanwhile, taking a look at defense: 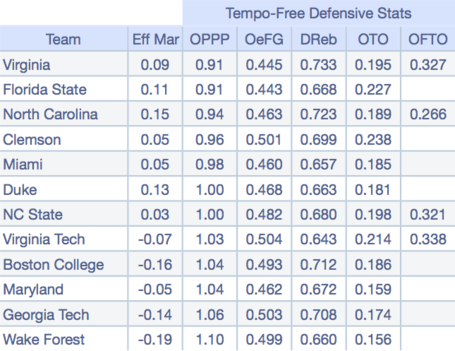 (Opponent free throw attempts are difficult to find, so I only grabbed a couple.)

Virginia has been leading the conference in defensive performance all season, mostly with good rebounding and great shot defense. It's one of the reasons the Tar Heels have lucked out in drawing the Cavaliers twice; they're a good team, but Carolina matches up very well with them. UVa's defensive rebounding prowess is almost completely negated by UNC's own strength on the boards, and their lack of turnover generation also helps the Heels. Carolina is going to take high percentage, inside shots. If they can get just enough perimeter shooting to keep Virginia from just collapsing on the interior – which the Heels have in the last two games – this defense shouldn't be a problem.

If there's a team that should be worried defensively, it's N.C. State. They were the fourth-best defense in the conference at the halfway point, allowing 0.97 points per possession, but have now fallen quite a bit. It's mostly rebounding and turnover generation, but coupled with State's own shooting woes when they have the ball, and they make a strong case to be the ACC team that slides right off the tournament bubble. They close out against three improving teams, Clemson, Virginia Tech and Miami, and two of them come on the road. The Wolfpack are not the team I'd want to be backing right now.