Why Is Krzyzewski Annoyed With This Particular Duke Team?

Share All sharing options for: Why Is Krzyzewski Annoyed With This Particular Duke Team?

Mike Krzyzewski's Blue Devils have lost two of their last three games at home, and he's not happy:

"The last two years, we haven't lost that many, but those teams were very mature," Krzyzewski said Monday on the David Glenn Show. "With Scheyer and Singler and Smith and Lance and Brian, we had older, very dependable guys. You knew what to expect. This year's team is a team that doesn't have those guys.

"One of the best ways of communication is if someone on your team is communicating your message. That's what Singler did on a daily basis through his effort or Nolan Smith through his effort and talk. Or Scheyer, Lance and Brian. They did that as big brothers. That's something we're missing on this team. Not being negative about our team, but we just do not have that. As a result, the message you're trying to get across may not be getting as deep as it needs to be."

As a Carolina fan, I feel compelled to point out that Krzyzewski's entire schtick is that he's a leader who happens to coach basketball and he's built an entire industry around it. So to blame his current woes on a lack of leadership from the team is a little risible. He has four juniors playing over half the game; if a team leader hasn't emerged, isn't that the fault of the guy who teaches leadership for a very lucrative living?

But why leadership problems may be a catch-all for Duke's current woes, I'm more interested in how they're manifesting on the court. Because one thing Krzyzewski does have going for him is an extreme adaptability to the players he has on the floor. When Roy Williams' 2010 team couldn't handle the fast-paced offense like teams in years past with Larry Drew at the point, he ran it anyway. (And in his defense, there's no evidence that team could run a slow, half court set either.) Krzyzewski, on the other hand, had 73.9 possessions per game in 2006, but 67.3 the very next year; he'll run at whatever pace he deems appropriate. He abandoned interior play altogether when he didn't have the players for it, and won a championship with the most unorthodox use of a center I've ever seen. He recruited 6'8" Kyle Singler and then let him hang out on the perimeter on offense all the time.

But there are a few constants, and one of them is defense. Going back to 2009, Duke hasn't allowed more than a point per possession in ACC play. Currently they give up 1.04. Their turnover generation the past two season is also the lowest it has been in that time frame, and their steals considerably. Opponents have always been a little leery of taking threes against Duke's swarming perimeter defense, but this season they're taking more than they did since Elton Brand patrolled the Cameron paint. And the current motley collection of Plumlees are no Elton Brand. 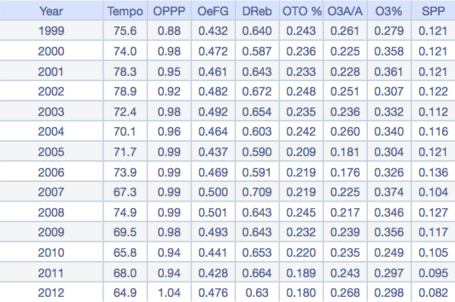 Frankly, the Duke defense hasn't been as fearsome as in previous years, especially on the perimeter. And when an opponent can combine decent perimeter shooting with an athletic big man, it's been trouble for the Blue Devils. Jared Sullinger, Reggie Johnson, and Xavier Gibson all had field days against the Duke interior, and both Miami and Tempe shot 50% from behind the arc, unheard of against most Duke teams.

So I'd look less to leadership issues and more to defensive ones. Particularly Austin Rivers and Andre Dawkins, who are generating very few of the steals that Duke so often relies on. The Plumlees and Ryan Kelly are doing a little better inside, but rely on their height a lot. Stronger or more athletic big men can cause havoc, and I expect Tyler Zeller and John Henson to do just that. And all the leadership in Krzyzewski's little head isn't going to fix that.