UNC the Number One Seed in the Midwest, Play Friday in Greensboro

Share All sharing options for: UNC the Number One Seed in the Midwest, Play Friday in Greensboro

The liveblog is still going on, but here's the important details UNC is the number one seed in the Midwest Region. They'll play the winner of the Lamar-Vermont play-in game on Friday, and then the winner of Creighton-Alabama game on Sunday. Both games will be in Greensboro; should the Heels advance they'll play the next two games in St. Louis.

And in St. Louis is where you can get angry. The second seed in the region is Kansas, who not only play close to home but are also the toughest two-seed according to the NCAA. In fact, had Michigan State not won their conference championship, there's a good chance Kansas would be a one-seed and the two-seed in this region would be probably Ohio State. Ah well, it is what it is. Here's the bracket: 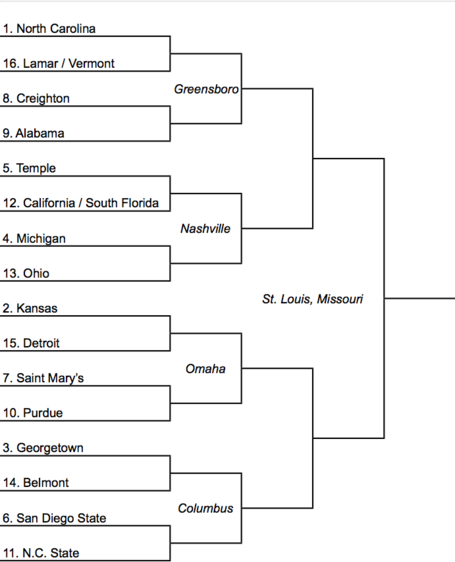 Creighton has the third highest three-point percentage in the country, and Alabama has the 331st. Otherwise, there are a lot of soft teams in this bracket. But Temple and Michigan both look strong. I'll have more analysis later.