An Incoherent Walk Through a Bracket

Share All sharing options for: An Incoherent Walk Through a Bracket

I'm a contrarian by nature. This manifests itself rather oddly when it comes the to fill out a tournament bracket, though. Nothing irritates me more than a consensus update pick – St Mary's is weak and N.C. State has momentum? Screw that, the Wolfpack exist to disappoint their fans. California deserves a better seed and USF shouldn't even be here? Convince me anyone from the Pac-10 is any good first. Syracuse is toast without Fab Melo? I'm now more likely to pick them.

Of course, I'm not making all of those picks. Don't think I'm not tempted – a bracket of not picking any of the upsets everyone is picking does have its appeal. But since it's a quite Wednesday night and I'm putting my basketball knowledge up against college friends who routinely shred me despite knowing little more than the team nicknames, I figured why not lay out my thinking on this year's tournament? Besides the obvious, which is other people care about your tournament bracket only slightly more than they do your fantasy sports teams.

My first belief this season is that defense is going to trump offense. This came up a lot in the first half of my Midwest bracket preview where a lot of highly-efficent offenses are meeting strong defenses. I'm tossing my lot in with the defenses, so put Alabama ahead of Creighton, Georgetown over hot upset pick Belmont, and yes, South Florida (should the lead over Cal hold) over Temple. That's also why I'm succumbing to the herd and picking Kansas State over Syracuse. Not necessarily because of Melo's absence – although as a guy who's been watching UNC play without John Henson, I'm very attuned to the importance of a tall shot-blocker – but because KSU has relied solely on their defense through a rough Big XII season.

If I was smart, of course, I'd pick another one-seed to fall instead. After all you win pools not just on the strength of your picks, but picking the right upsets that no one else sees coming. And Michigan State - Louisville is a tough call. The Cardinals' defense is very strong, after all. But if there's one thing I've believed this entire basketball season, it's that the teams at the top are a lot better than everyone else. You can really put together a group of six or so teams who just had so much more talent than everybody else. Now the funny things is not everyone would agree on the same six teams, but almost surely Kentucky, UNC, Kansas, Missouri, and yes, Michigan State would be in that group. And although it's very tempting to drop Michigan State, especially when I have them playing the second most efficient defense and the most efficient offense in two straight game, I just don't trust Mizzou's defense. Besides, if there's a year for chalk, it's this one.

Which brings me to the East region, which unfortunately falls apart pretty quickly when you take Syracuse off the table. Ohio State becomes the next natural choice; they have the most efficient defense and a top-ten offense. They also lose focus worse than Carolina has this season, losing three of their last seven regular season games. Still, I can put them past Florida State – Michigan State destroyed the Seminoles, after all. But where does that leave the regional final? Two Big Ten teams who know each other intimately well? At this point, I just pick Ohio State because I don't want the Heels to face Wisconsin again. Or Florida State for that matter.

This season has reminded me a lot of the 2005 one, particularly in the way I've felt there were two teams just better than everyone else, destined to meet in the finals. And while a lot of people may have thought that, but about two-loss Kentucky and Syracuse, not me. It was always Kentucky-Carolina, and naturally, that's my championship game. Who will win? Honestly, it could go either way. And although I have in the past advocating not picking UNC in NCAA pools – under the philosophy that if I have to suffer a Tar Heel loss, I deserve to be paid for the trauma – but I'm never picking against this team in championship game. UNC all the way.

Here's what I came up with (click to embiggen). Now to find a bunch of other SBNation pools to enter this in just to be obnoxious. 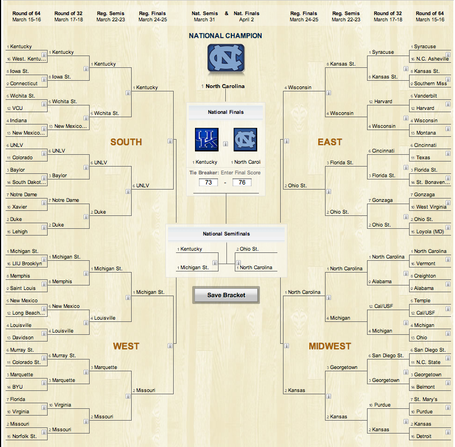 (Also, all of you people picking South Dakota State are on crack. Crack, I tell you.)

Yahoo! Tourney Pick'em supports SBNation and the best college sports tournament of the year. Join the bracket pools of Drew Brees, Michael Phelps, and Lil Wayne-- all while competing in the $5 million Perfect Bracket and $10,000 Best Bracket Sweepstakes. Be part of the best and biggest Yahoo! Sports tourney game yet – sign up today!