The Decline of the Cameron Crazies, Part 5,280 in a Series

Share All sharing options for: The Decline of the Cameron Crazies, Part 5,280 in a Series

So the front age of the Cameron Crazies cheer sheet is making the rounds of Twitter, as published by Tar Heel Monthly. I reproduce it here, for posterity: 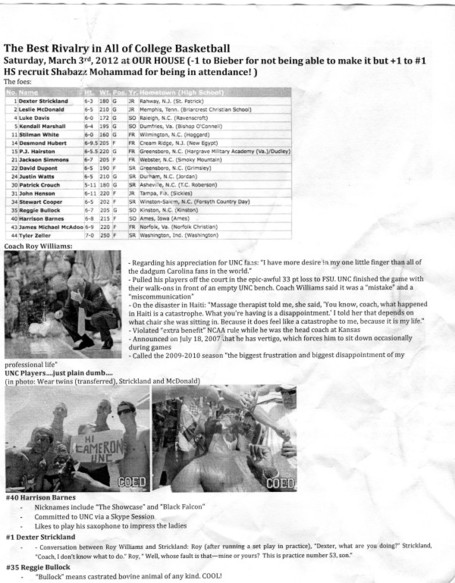 The mere existence of the cheer sheets, which only date back to around the middle of the 1990's, were one of the early signs of Duke fans' decline. Prior to that the Crazies would actually follow college basketball, and know of the foibles of their opponent's players. But even the cheer sheets had one thing going for them – cheers. Check out one from 2001 (PDF). It was mostly about getting everybody on the same page, with select cheers directed at their opponents. Even as late as 2009, they were at least cheers involved.

But this? The UNC roster, copied from a web site, some grainy black and white photographs, and some facts that sound like they're ripped out of a Tiger Beat profile? This is a crib sheet for folks to use in message board arguments, or to console themselves after an 18-point drubbing. There's nothing else here. The same apparently holds for the Maryland game. Rumor has it other pages contained Kendall Marshall's cell phone number, but if he was kept awake before the game I didn't hear about it and it sure didn't affect his play.

I'm beginning to see why Krzyzewski berated his own fans this season. (Not that he doesn't always go to that well when frustrated.) This is pathetic. This sheet might bet you a sick burn on a Facebook wall, but at the game? Well, it wasn't just Carolina's overwhelming dominance that silenced that crowd, apparently.