How Does This Team Compare to the UNC Championship Squads?

Share All sharing options for: How Does This Team Compare to the UNC Championship Squads?

I've been compiling the conference-only tempo-free statistics for the ACC for quite a few years now. I'll have a piece on this year's numbers tomorrow, but in the meantime, we can compare UNC's performance over the last fourteen seasons. It's not a perfect experiment – you can make a pretty good argument that the ACC as a whole isn't nearly as strong as it was in 2005, the heady days when UNC, Duke and Wake were 1, 1, and 2 seeds, respectively. Still, it will serve as a decent yardstick to compare to Roy Williams' other teams. 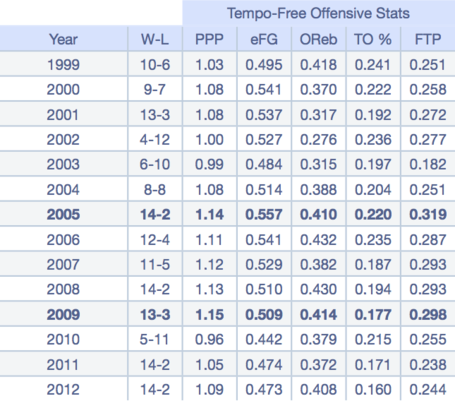 Carolina's offense isn't nearly as efficient as the championship teams, but at least it's an improvement over the last two seasons. The problem, unsurprisingly, is shooting, which fell off a cliff after the 2009 season and has yet to recover. Even the Matt Doherty teams were better shooters than the post-Hansbrough teams. Three-point shooting has been the largest weak point for this team, and we all have our opinions on whether the problem is getting better or worse. Outside of that, the team is doing well, though. They have the lowest turnover rate of any UNC team in over a decade, and by a large margin. Kendall Marshall's care with the basketball is superb; only Ty Lawson's work on the championship season (and only that season) comes close. The Heels, led by a freshman Marshall last season did better in this regard than Lawson as a junior. It's the most confidence-building thing about this team.

Also, the free throw shooting is abysmal, as we all now and scream at the television regularly. It's a lot better than it was two short weeks ago, though. Now, the defense: 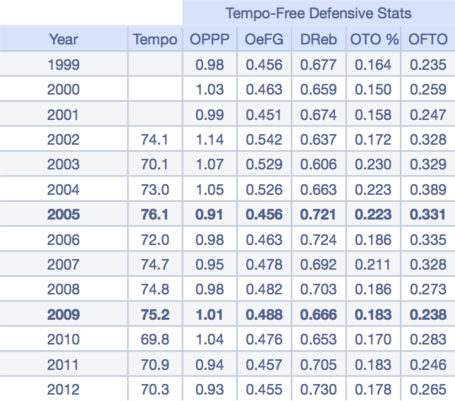 I apologize for not having the pace data for the Guthridge years, but you can see the teams post-Lawson have been the slowest of Williams' tenure. The two championship teams were also the ones that had the most success imposing their tempo on their opponents; this year's crew hasn't had that same success. I don't know how much of that is Marshall being slower than Lawson – Marshall is still plenty fast – versus all those missed shots extending possessions. Or perhaps it's the lack of perimeter shooting. When a team is more reliant on working the ball inside on most possessions, that's going to take time in a half-court offense.

Pacing aside, this is one of UNC's best defensive teams. Only the 2005 team had better efficiency numbers under Roy Williams. And this team excels beyond that one in many ways. Their shooting defense is better, their rebounding is much better, and they rarely, rarely foul opponents. The only metric by which the 2005 team is better is in turnover generation. The 2009 team wasn't in the same league defensively, and was, in fact, pretty poor in that regard.

So am I optimistic about this team's championship chances? It varies. I'm not sure there's a team that can beat the one that came out and blew the door off of Duke last weekend. But I rarely see that team. Instead, we have an inconsistent team that's very stung defensively, somewhat flawed on offense, and not nearly as fast as Roy Williams' best teams. But then again, the 2005 and 2009 teams had some big differences, and more than one person said the 2009 team wouldn't cut down the nets because their defense was so middling. This team has a decent chance of winning it all; it'll just be a slightly different route than the ones Roy knows.