A Brief History of the UNC Athletics Web Presence

Share All sharing options for: A Brief History of the UNC Athletics Web Presence

UNC announced today that the athletic department's website Tar Heel Blue was transitioning over to GoHeels.com as of July 1st. It may appear to be a distinction without a difference, as the latter domain has just forwarded to the former for a number of years now. But nothing ever that simple in he synergistic world of corporate buzzwords. The change is part of the horribly named NeuLion, Inc., taking over digital media responsibilities from CSTV. That the new partner works with ESPN while the old is owned by CBS might be a coincidence, for all I know.

It did get me nostalgic for the days before digital media partners and ad-strewn pages that took minutes to load. So I present to you the first UNC athletic department's web site: 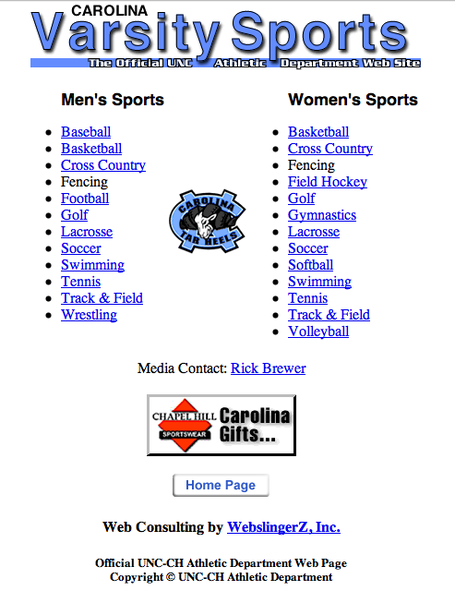 The web address at the time was http://www.adp.unc.edu/sis/athletics/teams/home.html which wasn't the most catchiest of names. That logo in the middle was animated though, scrolling through various sports symbols, which was nice. And there was no use of the blink tag. They also had a web consultant even then, WebslingerZ out of Carrboro, despite the fact they probably could have gotten a CS student to do a better job as an intern. The site was functional and easy to use, even on Lynx though. It wasn't as polished as the two sites that would eventually take it over, however. First, actually predating the department's site, was GoHeels.com: 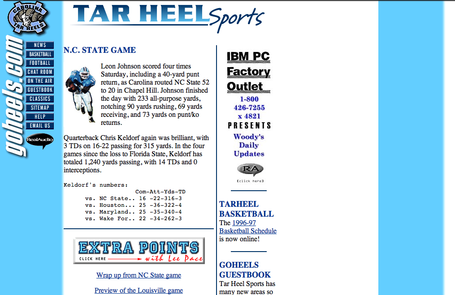 A product of Tar Heel Sports Marketing, the site was advertised relentlessly on the radio, and had a proto-blog for Woody Durham. Art Chansky and Lee Pace were also writing for the site. They also had everybody's phone number on the site, because it was the nineties and that's how things were done. Within a few years, they too were working with WebslingerZ, a name that doesn't get less ridiculous the more I type it. 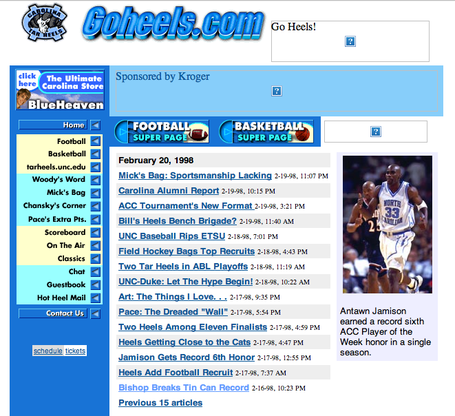 By 1999, UNC had abandoned WebslingerZ and contracted out to FansOnly, who registered the tarheelblue.com name. It still wasn't much more than official university releases, schedules and some boiler plate stuff about the university. 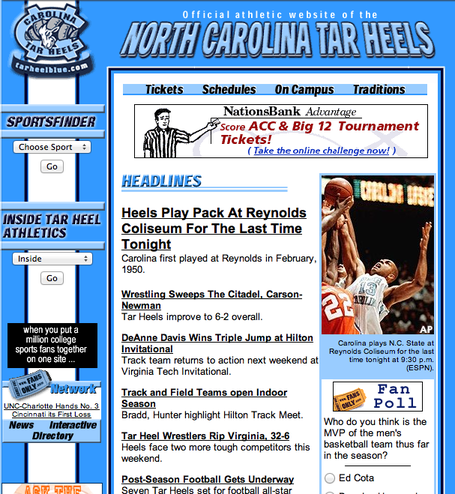 GoHeels.com was struggling however, having lost ground to the web site of Inside Carolina magazine. (Which had, I believe, been part of the AllianceSports purchase by Rivals.com before their website was even up and running. They were a rivals subdomain almost from the start, although the saga of Rivals' bankruptcy and how IC eventually became The Insider and later Scout while AllianceSports was absorbed into Yahoo is too complicated to go into here.) In 2002, VilCom sold GoHeels.com to Learfield Sports, who by then owned the Tar Heel Sports Network. This resulted in Woody Durham and Art Chansky writing for the official athletic department site, an odd situation that would remain until Chansky offered to have Butch Davis replaced as head coach.

The last ten years of UNC's web presence has pretty much been a painful series of slowly-loading sites filled with pop-up ads, bringing us to today. Not that I'm expecting much better from NeuLion; you can get a taste for their aesthetic by seeing Duke's athletic site, which they currently run.

I will give the Blue Devils, and possibly NeuLion, this. They have created this site, in conjunction with StatsGeek.com, and it is absolutely brilliant. I want this for UNC. I'm ashamed Duke has a better statistical web presence than the Heels. Make this happen, UNC Athletic Department, and I'll forgive a lot from the last few years. And if you could not break every link from the last ten years, I'd appreciate that, too.

(I mean, I know Dean Smith was charting offensive and defensive rebounds since day one. This could be a gold mine to internet nerds.)