The 7th Annual Judging of the ACC Non-Conference Schedule

Share All sharing options for: The 7th Annual Judging of the ACC Non-Conference Schedule

I don't have much in the way of traditions with this blog, but one thing I've managed to do in each of the last six seasons is make disparaging comments about the non-conference schedules of the ACC football teams. To be fair, when I started, it was really, really, bad. The only BCS conferences they were scheduling were the Big East and the SEC, while conferences like the MAC and the Sun Belt were taking most of the slots. As the years have gone by, schools have evolved away from that, putting one or two marquee names on the schedule and greatly amping up the use of FCS schools.

So how do things shape up this season?

There you have it. Props to Clemson and N.C. State for scheduling tough openers — even if the Wolfpack still like playing South Alabama, a now-FBS team that was still only founded in 2009. FSU is obviously the most embarassing, and UNC's isn't great, but for reasons beyond their control, so we'll let it slide. And blame Tennessee, the chickens. And here it is graphically, if your so inclined: 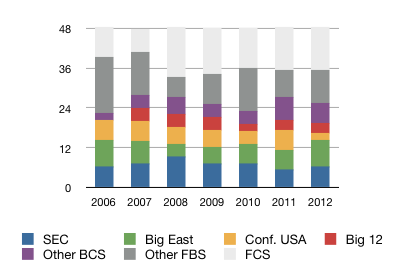