Share All sharing options for: Win Probabilities for the ACC Football Season

Bud Elliott has done an interesting thing over at Tomahawk Nation – he's taken the betting lines, preseason rankings, and some secret sauce and calculated the win probabilities for each team in conference play. These numbers are only as good as the inputs, and I'm not really convinced that anyone knows anything about the ACC this season; it still makes for an interesting bit of data:

That's interesting and all, but here at Carolina March we never put anything into a table we can put in charts. So let's break into the Coastal Division: 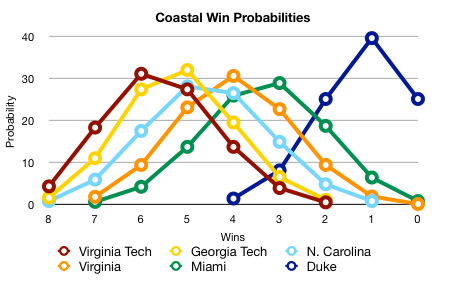 The Coastal Division looks pretty much like you'd expect; UNC, Georgia Tech and UNC smeared out around 5 or 6 wins, Virginia a small step behind, Miami all over the map, and then Duke spiking in the 0-2 win range. I don't think Duke will be that bad, actually, and Miami could probably stand to have not so large a deviation, but otherwise it seems pretty sound. Some important takeaways: UNC has a 79.1% probability of finish 0.500 or better, and a 52.5% chance they'll best Butch Davis's best conference record in Chapel Hill. 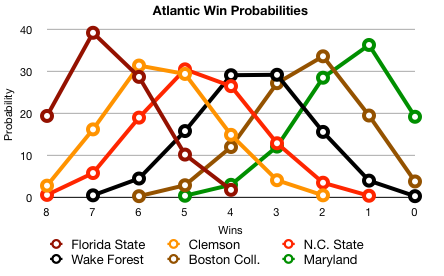 The Atlantic is even more likely to have a host of schools finishing with a game of .500. In fact, only Florida State and Maryland look to be the outliers. (And why is Maryland green in this plot? Because the entire Atlantic Division uses like three colors.) I'm actually intrigued that the probabilities are as differentiated as they are. Note also that UNC and State have almost the same probabilities at every win. I swear, no one cam tell these teams apart this season.