Announcing the Next Step in the Evolution of Carolina March

Share All sharing options for: Announcing the Next Step in the Evolution of Carolina March

I have been blogging for seven and a half years now, six of them for SB Nation. That's a time period that encompasses two basketball national championships, four head football coaches, and 2,190 posts. Blogging for me began as a thing to pass the time in the lab during UNC's 2005 championship season; at the time I doubted I would last more than a month. And yet, here I am. I've written more words about Carolina athletics than anyone in their right mind would ever expect to, and I've loved almost all of it. (The academic scandals? Those I could have done without.)

College sports blogs often have a short lifespan; only one or two of the ones I followed when I started still exist. Even within SB Nation, there's a fair amount of turnover. I came aboard the same time Jon Johnston at Corn Nation did, and we were the 19th and 20th college blogs to join the network. Looking back at the blogs that were there when I signed on, less than half still exist. Most of the eight others that remain have expanded to become conglomerates, still with the same strong editorial voice but with multiple authors, posting many times a day and generating thousands of comments.

Here at Carolina March, it's still just me. I post when I can, and my readership is small.

It's slightly embarrassing to the network. I cover one of the most popular universities in college athletics; the only one to rate an individual team blog on ESPN. And yet my coverage is what one guy with a day job can manage. I'm immensely proud of the work I do here, but folks looking for breaking news generally go elsewhere. It's something I can't provide on my own.

And now I won't have to. Starting next week, this blog will be merging with the best UNC blog out there, Tar Heel Blog. I've been following Brian's blog for almost as long as I've been at SB Nation, and he's grown it into a must-read site. And as a few people noticed when the new logos were released this morning, he's joining the network here. The name will become (or remain, depending on your perspective) Tar Heel Blog; this site will automatically redirect there. The archives will be merged, a technological feat that wasn't available when I came aboard. We apologize for the confusion that may result should you go taking a deep dive into past posts.

I won't be going anywhere, and I'll still be posting with the same frequency I always have. I'll get to step back from the day-to-day news cycle though, and write more about the things that interest me, especially with regards to the sports outside of football and basketball. The blog will be infinitely better, with a quicker response to news, a larger community, and a better quality of commentary.

I'm immensely proud that I made it this long with a solo blog, in a day and age when that's pretty close to impossible. What's coming down the pike is going to be fantastic however, and I'm thrilled to be part of a team blog that will be able to fully take advantage of all these tools. So with that, here's the actual new logo we'll be implementing: 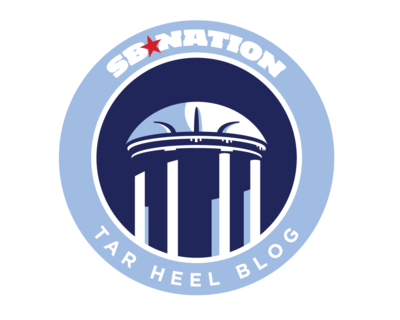 It's going to be fantastic.