Two weeks into conference play and it's time to start looking at the early returns. Are ACC teams struggling on offense or just playing very tight defense?

Statistics lie; they lie even more when the sample size is small. And so with each ACC team having only played four or five conference games, the information you can gleam from conference-only statistics is dubious at best. But it does describe what we've witnessed the last two weeks, and seeing the early numbers on paper tells us a few things, at least. The most prominent being that offense in the ACC are really, really bad.

(A brief digression to those of you who never read Carolina March. I periodically compile the tempo-free statistics for the ACC conference games. John Gasaway also does this for Basketball Prospectus, and Ken Pomeroy has added conference-only stats to his site this year, but I still enjoy putting the numbers together myself as well. For those of you unfamiliar with tempo-free statistics, here's a quick primer.) 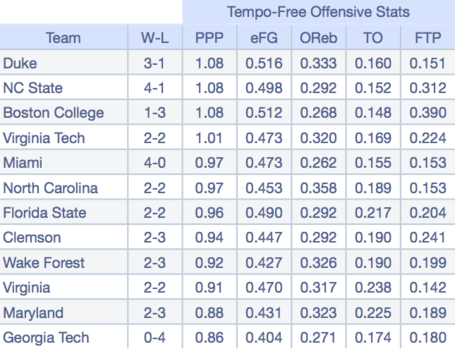 We'll begin with the offensive numbers, such as they are. Last season, the ACC's offensive production took a serious hit, with four teams scoring less than 0.95 0.96 points per possession. So far this season six teams are failing to clear that low bar, and if Georgia Tech continues at it's current pace, they will have the worst ACC offense in the eight years I've been blogging. In such weak company, UNC's 0.97 points per possession seems almost respectable. Of course, the 2010 team managed 0.96 points per possession in conference play, and they're the only Roy Williams team at Carolina to average less than 1.05 in that category. But it's early yet, and the team is showing signs of coming together on offense. It doesn't help matters to see Tar Heel opponents UVa and Maryland at the very bottom of the offensive charts however.

The three teams with solid offenses are interesting, however. It's no surprise to see Duke and State, the two highest-ranked ACC teams at the top of this list; that 1-3 Boston College is there is more surprising. The Eagles are incredibly poor offensive rebounders, but excel at getting fouled and not turning the ball over. As we'll see in a minute, they also love the three. They're the leading contender for UNC's Embarassing Loss of the Year at the moment, I'm afraid.

Also note that Duke is struggling at the line. They're not getting fouled as often, and they have the worst free throw shooting percentage in the conference. Expect that to regress to the mean by the time I look at this next. 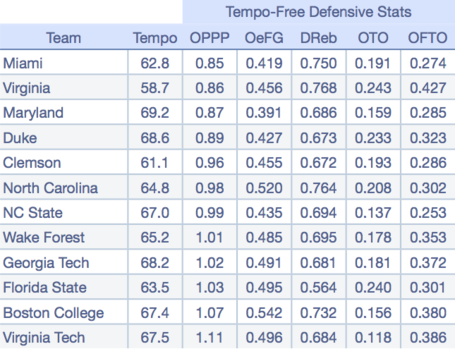 On to defense. Here we can take solace in the fact that Carolina's defense has been respectable, at least on paper, with the second-best rebounding in the ACC, and solid turnover generation. We also see three of UNC's first four opponents are the top three ACC defenses which slightly redeems the Heels for their poor offensive play. Of course, we also see that only Boston College was easier to shoot on in the last two weeks. And the next table will show just how opponents' shooting has destroyed the Heels.

Overall, this looks like the best collection of ACC defense in quite awhile; I can't tell how much of that is due to the aforementioned horrible offenses, but Ken Pomeroy has four ACC teams in his Top 20 defenses, so there's some truth to it, at least. The best defense o the last eight years was the 2005 UNC team, which held opponents to 0.91 points per possession, so that might give you a bit of a hint on how impressive these early numbers are. I think most of these numbers will rise as the season goes on however. You have to worry about Virginia Tech, though. The Hokies had a pretty easy start to the schedule, with offensive incompetents Wake, Maryland, and Georgia Tech and still allowed the most points in the conference. The team grabs few rebounds and forces no turnovers; there's a reason Ken Pomeroy's projections predict the Hokies will lose every game remaining on the schedule.

Two other things worth noting. UNC's tempo in ACC play is much, much, slower than they'd like to play. At the moment they're the slowest team since Dean Smith retired. Maryland was the first conference game where the Heels had more than 63 possessions (they had 71 against the Terps); more games like that and UNC's numbers on both ends of the court should start looking a lot better. And secondly, State has forced a pathetic number of turnovers this season. 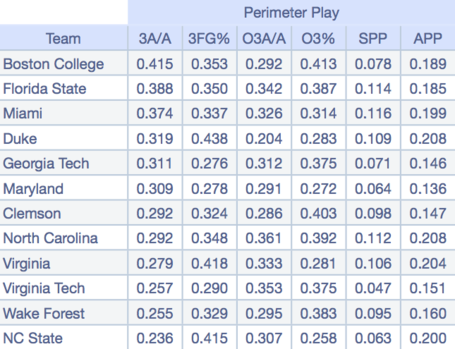 Finally, here are some perimeter-oriented stats, along with some miscellaneous numbers on steals and assists. It's worth noting that Duke is shooting threes with amazing accuracy, even as they shoot less than they typically do. (Funny story about that old article. Not too long after I wrote it, Duke began their strategy of Brian Zoubek kicking the ball out to the perimeter after offensive rebounds. The Blue Devils would lose only one game the rest of the season and win the national championship; their three point attempts would end up pretty much right in line with where they were every other year.) And their perimeter defense is just vicious; no one even attempts to shoot over them.

Also check out how teams attempt more threes against UNC than any other school despite this being the year where the Heels are undersized, relative to previous teams. It's not hard to see why; its pretty easy to score on Carolina from behind the arc. Expect to see more of that sort of play, especially from Boston College and Duke. This is also why the State game this weekend may be the most interesting of the year, because the Wolfpack have a great shooting percentage from behind the arc but rarely take threes. How they decide to attack the UNC defense will be fascinating to watch.