No sequence is a better summation of UNC's seemingly snakebitten season than the series of misfortunes that befell the Tar Heels on the 3rd down and inches play in the 4th quarter.

Share All sharing options for: A Good, Bad, & Ugly Special Report : The 3rd and Inches Play

It would be very easy to do a traditional GBU report after Thursday night's Miami contest in which UNC led for much of the game before surrendering a touchdown with 16 seconds left and falling 27-23. Eric Ebron set a school record for tight ends with 199 receiving yards and a touchdown, and the Carolina defense held Miami to only two offensive touchdowns while forcing Hurricane QB Stephen Morris into four interceptions. There was also a blocked field goal attempt by the Tar Heels where tight end Eric Albright crashed down rather than picking up Miami's outside rusher, who easily blocked the kick. The ball fell right into the waiting arms of Ladarius Gunter who raced 67 yards for a touchdown.

But without a doubt the most talked-about play of the game was a play that never counted. With the Tar Heels up 3 points and the ball at mid-field with 5:40 remaining in the fourth quarter, Carolina was flagged for a rule-assisted delay-of-game penalty, making 3rd and inches into 3rd and 5+ yards. Here is a breakdown of what happened on that ill-fated sequence:

On first down and 10 from the UNC 40, quarterback Marquise Williams handed off to A.J. Blue for a 4-yard rush up the middle. On 2nd and 6, Williams ran up the middle to the shadow of the first down stick. And then the screwiness began.

Williams called for the Heels to huddle, as the offense attempted to milk the clock. Shortly thereafter, Bryn Renner replaced Williams and called a play in the huddle. Then, with about 9-10 seconds on the play clock, Carolina inexplicably shuttled in three new players (this was an advantage of seeing the game in person since those of you watching the game on ESPN did not see this as the camera remained tight on Renner in the huddle). From there, facts end and interpretations begin.

As noted on Inside Carolina, what happened then is governed by NCAA Rule 3-5-2-e:

While in the process of substitution or simulated substitution, Team A is prohibited from rushing quickly to the line of scrimmage with the obvious attempt of creating a defensive disadvantage. If the ball is ready for play, the game officials will not permit the ball to be snapped until Team B has placed substitutes in position and replaced players have left the field of play. Team B must react promptly with its substitutes.

Carolina then broke the huddle and went to the line in formation. In the picture below, note that there are five seconds on the play clock and Miami has 11 players on the field. The umpire is standing over the ball, preventing center Russell Bodine from snapping the ball. 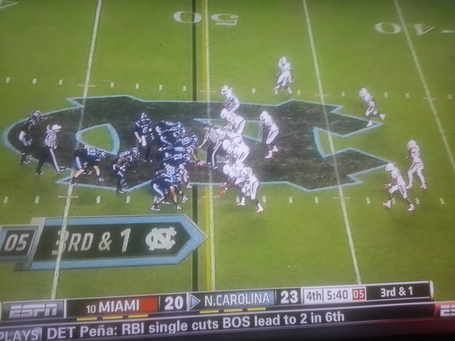 In the post-game comments, UNC coach Larry Fedora says he was told that the officials said Miami had to be given three seconds to substitute. Referee Gary Patterson appears to be giving a 3-second motion with his arm as he stands in the Tar Heel backfield while the umpire continues to stand over the ball. 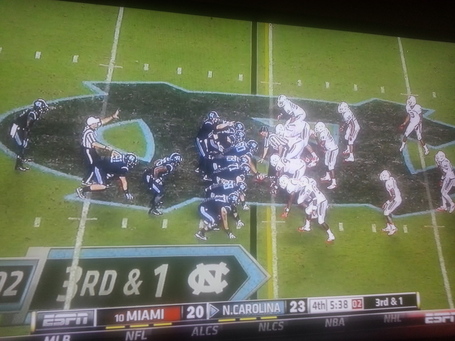 The issue seems to be that there is no provision for a 3-second delay in the rules. Maybe someone in the media will ask that question of ACC coordinator of officials Doug Rhoads this week.

Patterson then gives the all-clear and the umpire moves off the ball with one second remaining on the play clock. It is possible Bodine could have snapped immediately but he waits until the umpire clears and by that point the play clock had expired. 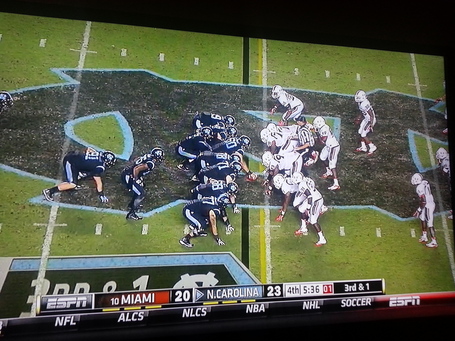 Carolina takes a five-yard penalty for delay of game, making it 3rd and five. UNC right tackle Jon Heck was then flagged for a false start when he nearly imperceptibly flinched his right arm, turning 3rd and inches into 3rd and just over 10 yards without an official snap. Renner was then sacked after Heck was blown up and Carolina was forced to punt. Tommy Hibbard got off a fabulous punt, pinning Miami at its own 10, but the Canes marched 90 yards for the game-winning touchdown.

So exactly what happened and who deserves the blame for a potentially game-changing sequence of events?

Ultimately it comes down to this: when you are having the kind of season the Tar Heels are enduring, this kind of stuff seems to happen to you. In my experience, Carolina can go one of two routes from here. They can go on believing they are snakebitten and find ways to lose games, or they can realize they put together one of their best efforts of the season and build off that for a second half of the season that gets markedly easier than the first six games.

When I was coaching basketball, one season we began 2-11 despite having a decent team. We played a brutal early schedule and just couldn't find a way to break through. Finally, one night it all came together for 3 quarters. We played with passion and everything seemed to be going our way. We led by 13 going into the 4th quarter and gave up a 33-17 run to end the game, losing by 3 points. I seriously worried for our kids because they had played their hearts out and lost. I was afraid we would think no matter what we did, we couldn't win. We came back the next game to grind out a win and end the season winning 7 of our last 9 games, including upsetting the #8 team in the state twice. It just took one win to turn things around.

UNC is what their record says they are, a 1-5 team. But the records of the 5 teams that beat them is 26-8, and Carolina has lost their three ACC games by a combined 22 points. The season is not lost and 5-1 or even 6-0 on the back stretch to become bowl eligible is not outside the realm of possibility. The question now is will the rebound, or will they fold?