By the second half of the season, a team's statistical fingerprint is usually set in stone. There just aren't enough games remaining to radically change your style of play; barring a complete collapse or loss of a key player, your team is your team. And if you look at his week's numbers, they're pretty similar to what I've posted in previous weeks. Duke, N.C. State, and Miami have good offenses. Miami has the conference's best defense. Virginia Tech is just awful. Yawn.

In the past two weeks though, a few teams have made big enough improvements that they show up in the numbers. And funnily enough, they're UNC, UNC's last opponent, and the team they play tonight. So let's take a look at the numbers: 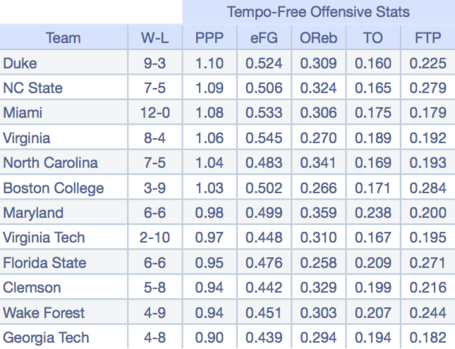 Four games ago, North Carolina was barely managing a 1.01 PPP and had the worst effective field goal percentage of any team with a winning conference record. Now, although a step below the Duke/State/Miami triumvirate, the Heels are respectable; they've brought down their turnovers and are finally making shots. They haven't improved nearly as much as Virginia though, who was averaging a measly 0.98 PPP. The Cavaliers averaged a vicious 1.22 PPP in the last two weeks. Sure, that includes a game against the ACC's worst defense, but the other three are quite good at stopping opponents. Usually. Virginia has been on fire recently, just hitting shots with abandon. If they keep this up, they'll finish as the most efficient offense in the conference — not bad for a team that was third-worst the first time I looked at these numbers. 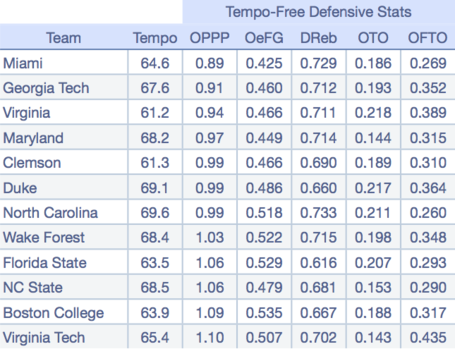 Both Carolina's and Virginia's resurgence came at the slight expense of their defense, which dropped slightly. Nothing particularly serious, though. Virginia's is still third-best in the ACC. (The Cavaliers are also playing four or five more possessions than their average over the last two weeks, ending the tyrannical reign of Bennett-ball.) But the team to watch here is Georgia Tech. Two weeks ago, the Yellow Jackets were allowing 0.99 PPP. Some of that's scheduling, as GT has played the worst offenses they'll see outside of scrimmages in Clemson and Wake Forest twice since the last time they played the Heels, but still, this is a good defensive team with a powerful front court. Of course, they also foul heavily, and they're offense is absolutely wretched; this will be a good test of UNC's new, smaller offense, especially without Joel James to bring some bulk into the paint.

As good as Tech's defense is, N.C. State's is a dumpster fire. In the first one of these I did this season, the Wolfpack and UNC had equivalent defenses; since then State has dropped like a stone. Part of the problem is they generate no turnovers; their rebounding is also suspect for a team with that many big men. The Hokies even burnt them for 1.15 PPP in Raleigh. As good as their offense is, I'm don't trust State to go better than .500 the rest of the season.

One more thing — the consensus explanation for last year's Duke team has settled on the fact that Austin Rivers was toxic and not a great defender. This year's team supposedly fixed those problems, but is only averaging 0.3 PPP allowed. And Mason Plumlee has been embarrassed in two straight games now. 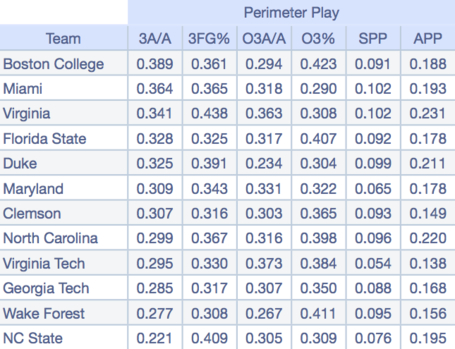 And bringing everything full circle, gaze upon the improved three-point shooting of UVa and UNC. Both teams are taking more threes and making considerably more of them. The last four UNC teams to shoot as well as this in conference play all made the Final Four (2009, 2008, 2005, 1998) and Virginia's shooting better than any team since I started tracking this stat. Both teams are also letting ball movement pay off, with high assist numbers. I expect big things from both teams as we head down the stretch.