Halfway through ACC conference play and we're just where everyone expected we'd be, right? Undefeated Miami atop the conference? Surely that's what we were all thinking back in November, wasn't it? Either way, with every team eight or nine games into conference play, the tempo-free statistics (more info here) start to truly reflect the teams. And the first thing they tell us is the offenses aren't as bad as they were two weeks ago: 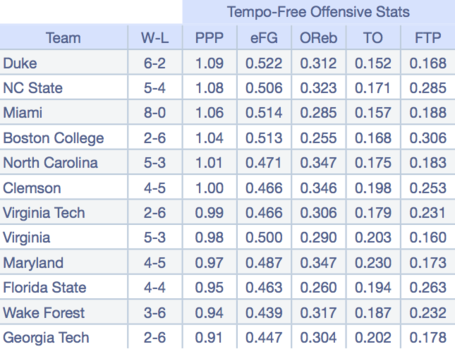 Don't get me wrong, there are some pretty poor ones, still. But even Georgia Tech, ACC basement dweller and current holder of the Worst ACC Offense crown, has picked it up in the last two weeks. In the Yellow Jacket's defense they started playing slower-tempoed teams not known for their defense, but still. Only three teams saw their offensive numbers decline — Boston College, Clemson and Virginia Tech. Tech and BC are pretty poor teams, but Clemson is a mystery to me. Statistically, they're a slightly worse UNC, but I don't get that vibe at all watching them play. Ken Pomeroy predicts they'll lose their next six games, and I see no reason to doubt him. Expect to see them much lower on these lists in two weeks' time.

The tempo-free stats really make it clear that there are only three good offenses in this conference though, don't they? Remember that Miami was at 0.97 points per possession the last time we looked at these, meaning that in the four games since Reggie Johnson returned, the Hurricanes averaged 1.15 PPP. I don't think they'll run the table in the ACC, but there's really only two teams left on the schedule that can stop them, and that's only because I have a higher opinion of Carolina than I really should. 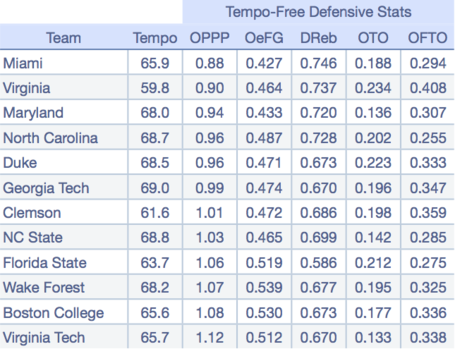 Miami's so strong because their defense put numbers like the above up every game. That's a defensive rebounding number better than any of the Roy Williams' teams from the last decade, and a shooting defense that tops anything Duke has fielded this century. I don't know if it will hold, but it's been a terrific first half of the season. UNC's defense continues to improve, although their defensive rebounding numbers came down from the abnormally high values of the first four games. Teams aren't making shots on the Heels at nearly the same clip they were before, and UNC has pushed the tempo back up to a at least a respectable number. On the season, Carolina has the 6th-fastest tempo in the country; that their ACC numbers are as low as they are shows how much trouble they're having getting the style of play they want against tougher foes. 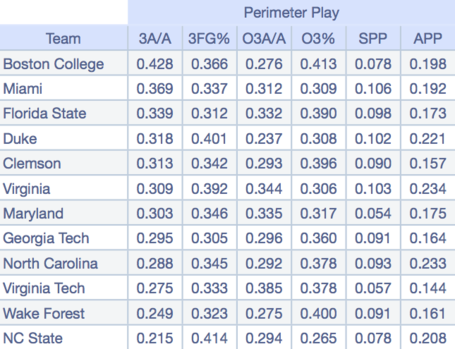 And now the collection of stats focusing on perimeter play. (They are, since I didn't make it clear last time, 3-point attempts per shot attempt, 3-point shooting percentage, the same two categories for a team's opponents, and steals and assists per possession.) Speaking of assists, UNC is surprisingly good at distributing the ball, considering how they struggle to score. They've also really improved their perimeter defense, giving up much fewer threes. State is still playing their "take very few threes but hit them all" strategy, which you think would work in their current stretch of playing the three best perimeter defenses back-to-back-to-back. It hasn't though — the Wolfpack lost to both Virginia and Miami, and beating Duke on the road doesn't look to likely.

Wake Forest seems pretty easy to shoot the three against, however, which when combined with their faster tempo and younger players makes them... well, another Virginia tech. Here's hoping the Heels get over the flu and put up a better performance this time.