Five games ago the lineup changed and UNC is 4-1 since but what do the stats say?

For the record, this kind of comparison has been done here at Tar Heel Monthly and also at Inside Carolina. Still, I thought it would be fun to lay out the numbers and see what's what since P.J. Hairston replaced Desmond Hubert in the starting lineup. 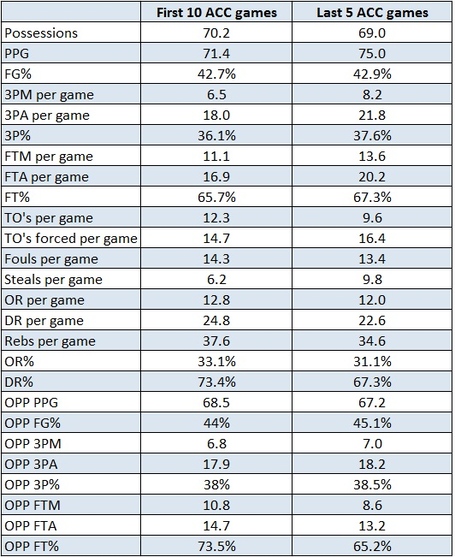 There are several key stats that have changed with the new lineup.

In football there is talk about turnover margin and winning that stat which means you take the ball away more than you give it up. That stat is not used in basketball but looking at the turnover stats is a huge clue as to why the smaller lineup is working despite the fact UNC is shooting about the same and so are Tar Heel opponents. Prior to the change, UNC was forcing 14 turnovers per game and turning the ball over about a dozen times. With the smaller lineup both of those numbers have taken significant turns in the right direction. Now opponents are turning it over 16.4 times per game while UNC is now at 9.6 miscues per contest. The biggest reason? Steals. UNC is collecting 3.6 more steals per game than they were prior to the change. Given UNC's penchant for transition basketball and the fact there are essentially four guards on the floor, turnovers and steals result in points. It also means fewer scoring opportunities for UNC opponents with a margin of almost seven turnovers per game.

No surprise here. If you put Hairston on the floor instead of Desmond Hubert, more threes are going to result. UNC is attempting three more from beyond the arc per game and making almost two more per contest. Overall that is an uptick of 1.5% on the 3P% despite the fact overall FG% is essentially flat. It is also one of the reasons why the PPG is almost four points higher despite one less possession per game.

The FT shooting has been suspect at times but in the past five games it is actually 2% better over the previous ten. UNC is also getting to the line over 20 times per game versus 16.9 FTA before the lineup change. On the flip side opponents are shooting 1.5 fewer free throws per game and shooting 8% worse from the line. The biggest reason behind fewer opponent free throws is UNC is not fouling as much now as the Heels did before down to 13.4 from 14.3. That includes committing 18 fouls against Duke with some of those occurring in an end game situation. In the last four games UNC has not committed more than 13 fouls as a team.

Again this is no surprise and it drew Roy Williams' ire last night when UNC was outrebounded by 14 after intermission. There are significant drops in both the OR% and DR%. UNC is collecting three fewer rebounds per game with the most damage coming on the defensive end. Not grabbing defensive boards is a problem since it opens the door for second chance points that has undoubtedly negated some of the advantages UNC appears to be getting with turnovers and three point shots.

Obviously UNC needs to rebound better but in some respects that could simply be an area of deficiency against some teams. The two areas UNC can and should build on are the three point shooting and shooting the ball in general. Since UNC is turning teams over more often, it should lead to quality shots in transition however there are plenty of instances where finishing around the rim has proven to be difficult for this team. The three point shooting should also be better given UNC is putting both Reggie Bullock and P.J. Hairston on the floor with Leslie McDonald getting plenty of run. Then again, I suspect Marcus Paige's on and off shooting stroke is probably impacting things a little. Ultimately, if UNC is making a living off turnovers, there will be games where an opposing team simply takes better care of the ball. That was evident some against Clemson who took care of the ball in the first half but UNC hit shots to take control of the game. In the second half UNC benefited from turnovers but failed to capitalize.

The Tar Heels need to do both well at the same time to really push the level of play up a notch. Five games ago the lineup changed and UNC is 4-1 since but what do the stats say?

CORRECTION: There is a reason they keep me away from the numbers because I am guaranteed to butcher them. I had the OR% and DR% calculated incorrectly. The chart and paragraph concerning the rebounding has been corrected to reflect this.