One more look at where the small lineup ultimately ended up by comparison.

Share All sharing options for: Revisiting the Lineup Stat Comparison 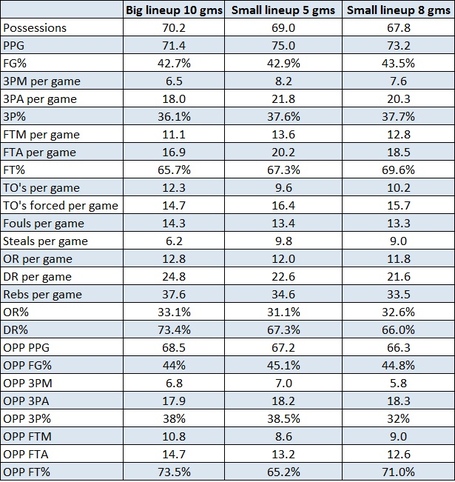 Overall, the smaller lineup continued to be a success as evidenced in the six game winning streak and despite what happened in the second Duke game. Probably the most surprising aspect of this lineup is it was made to augment offensive production but the defense has actually improved as well. UNC's defensive efficiency is actually ranked ahead of the offensive efficiency(33 vs 39) in KenPom which was not the case before. Some of that is the opposition with UNC playing teams that struggle offensively. However there is evidence of improved defensive play such as the first Duke game and the win over NC State in Chapel Hill. And even though some of the teams UNC beat struggled offensively, UNC still held them at or below their average offensive efficiency in most cases.

Any success UNC has in the ACC and NCAA Tournament will depend greatly on the three point shooting and defense performing at a high level.