The ACC Tournament kicks off tomorrow, but do we need to have watched an entire season of basketball to know what's going to happen? Of course not! We can get it all from a couple of columns of numbers taken out to three significant figures. And then sit back Thursday night and bask in the fact that are rock-solid predictions are horribly, horribly wrong, because it's a single-eliination tournament being contested by kids that aren't old enough to legally drink. Here are your tempo-free conference stats (guide here) and half-assed reasoning for what will happen on Thursday: 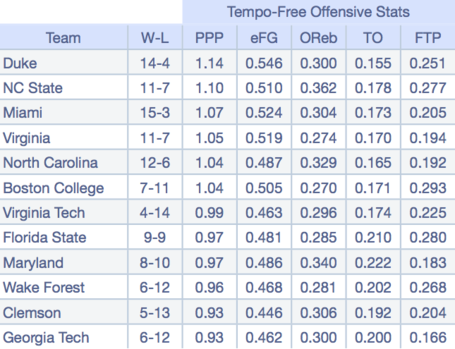 Let's start with the offensive numbers. Ryan Kelly has done Duke a world a good by returning; the Blue Devils have an offensive efficiency of 1.22 points per possession in the six games since I last checked the numbers, and the forward only played in three of those. The real amusing thing is that this offensive burst has come primarily at the free throw line, where over those six games Duke made a free throw for every three shots they attempted. For UNC that number is more like one in five.

The most illuminating comparison, however, is UNC and Maryland. Both have about the same (poor) shooting and good defense. But the Tar Heels have four more wins than the Terrapins, which pretty much can be ascribed to how well Carolina takes care of the ball. In fact, the last two years UNC has had fewer turnovers than any time in the previous 15. 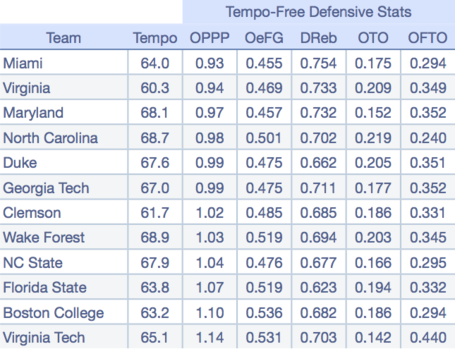 On defense, the numbers back up everything you already know about Carolina — good rebounding, great at forcing turnovers, with minimal fouling and poor shot defense. Luckily UNC's potential first opponents, Florida State and Clemson, are two of the worst shooting teams in the conference. I'd prefer the higher-seeded FSU as an opponent, as their defense is just horrible. The Heels will probable face Clemson, though.

It's interesting how much worse the defenses of the bottom-dwelling teams are than last year. The worst defense of 2012 (Boston College) would best three schools this year, and you have to go back to Miami in 2007 to find a team with worse shooting defenses than Tech or the Eagles. Funnily enough, that Miami team upset Maryland in the first round of the tournament that year. Sadly, I don't see much chance of Virginia Tech repeating that feat this season. 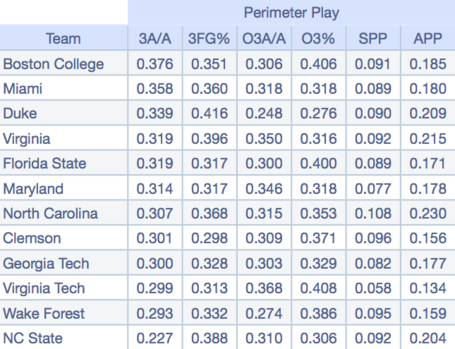 And then there's the perimeter play, or as we like to call it, When Did Duke Start Hitting All Their Threes? The Blue Devils started to get hot down the stretch, and adjusted by taking even more threes. That probably didn't help Miles Plumlee's player of the year hopes, but it did elevate the team down the stretch. And it's interesting that the three teams Duke lost to this season had both the three best defenses and three-point defensive percentages under 32%. UNC can hold their own with the former, but they'll have to defend the perimeter much better should they meet Duke on Saturday.

Since a hot streak from behind the arc is a good way to surprise someone in a one-and-done tournament, you have to pay attention to Virginia, N.C. State, and Boston College. Why the Wolfpack so rarely take threes when they're so good at it has been one of the season's great mysteries; it's possibly because their good shooters are all freshman or Scott Wood. As the bigs graduate and Rodney Purvis and T.J. Warren become the stars in the next few years I'd expect a lot more shots to come from the perimeter. As it stands, State could easily slip by Virginia and maybe trip up Miami.

Now for the Thursday predictions. Virginia Tech has the worst defense in the conference; the difference between them and State's poor defense is as great as the one between State and Virginia. So unless the Wolfpack fail to bring their brains to Greensboro, they should win easily. Boston College vs. Georgia Tech sees the worst offense (Tech) facing an equally bad defense (BC). While it could go either way, I'd give i to the Eagles' superior shooting from behind the arc. Wake Forest has one of the worst statistical performances away from home in the country; pair that with a good, if turnover-prone Terrapin team and Maryland should win handily. And finally, the one upset that looks probable is Clemson over Florida State. The Seminoles have a horrible defense, and who doesn't want to pick the team that hasn't won since Valentine's Day?