I missed the men's selection show this year, but I can still be on the ball for the women. UNC's women's team had a solid year, but was overshadowed by three losses to a very good Duke team. They should still end up with a better seed than their male counterparts, however; will they have as rough a road? I'll toss the brackets up as ESPN reveals them.

We start in Spokane: 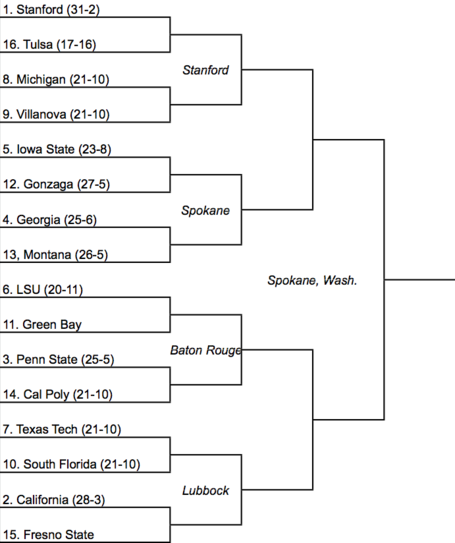 The women's tournament generally keeps teams closer to home when possible than the men, so it's no big surprise that there are no ACC teams in the westernmost bracket. Still, it was a down year for the conference, so I don't expect many ACC teams in the postseason to begin with. Three to go. 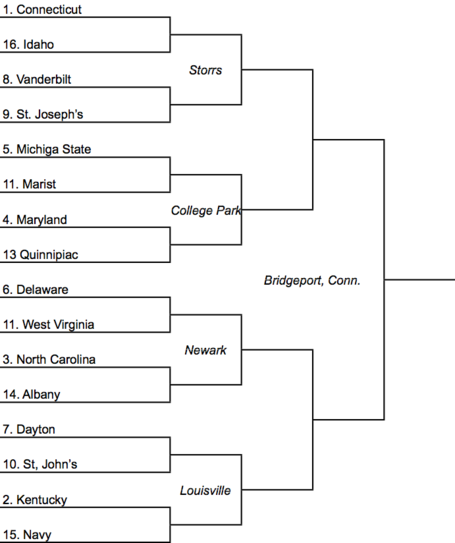 Here's UNC, a three-seed in Connecticut's region, having to play in Newark, where 6-seed Delaware will have the home court. That's rough; it's mitigated by Kentucky as the 2-seed. The Wildcats have been on a slide as the season wound down, and did not win either the SEC regular season or tournament. 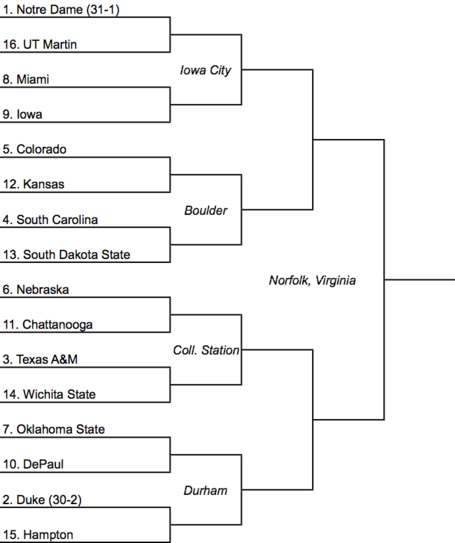 Duke gets a very reasonable two seed, but with Notre Dame as the one. Other than the Irish, only Texas A&M looks to give the Blue Devils any problems, unless South Carolina slips through to the Elite Eight. The Blue Devils didn't miss a beat when they lost their point guard Chelsea Gray and had to start freshman Alexis Jones; but I'm not sure they can get by Notre Dame.

Only three ACC teams so far with one bracket left to fill. Looks to be a lean year for the conference. 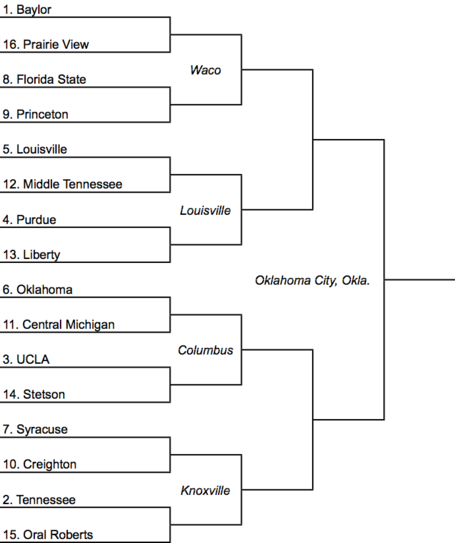 And here's the last bracket, with the fourth ACC team, Florida State. The Seminoles have a second-round appointment with returning champion and overwhelming favorite Baylor. Brutal. So four ACC teams and three future ACC teams (Notre Dame, Syracuse, and Louisville). The conference should be tough next season.

A little more information on Albany. The Great Danes (please keep the jokes in good taste, people) were a perfect 16-0 in the America East, and are the automatic qualifier after winning their tournament as well. They have only three losses, a good one to Michigan State and two poor ones to Sam Houston State and Fordham, both in November. UNC should be able to outmuscle them. The Heels meet Albany at 2:30 on Sunday in Delaware, presumably only a few hours before the men's team squares off against Kansas, should chalk hold. Should be an exciting day.