Prior to the 2012 season, Larry Fedora made it abundantly clear that his team's goal was to "win" the ACC's Coastal Division. It didn't matter that UNC was ineligible for the ACC Championship game. It didn't matter the ACC was not going to officially recognize North Carolina as the Coastal Division champion. It was a goal for a team that had no team goals thanks to an NCAA postseason ban.

So when UNC ended up 5-3 in the ACC and the technical winner of the division via the tiebreaker, it is only natural that Fedora and UNC would commemorate this achievement in some way. One way was a billboard and the other was a ring for the players. 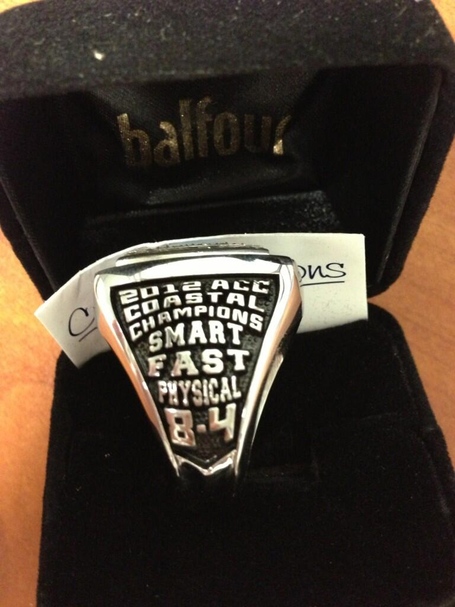 Obviously such an audacious act invites all sorts of reactions. My Twitter timeline this morning was full of angst and anger over UNC apparently thumbing it's nose at the ACC's decision not to recognize a divisional title. The argument goes that because the ACC prohibited recognition of the title, what UNC is doing reeks of arrogance. Speaking for myself, who really gives a crap? In my opinion this falls under Admiral Percy Fitzwallace's notion that there are honest-to-God battles to fight so I don't have time for the cosmetic ones.

It also reveals the folly of the NCAA's penalty system and the degree to which it incorrectly punishes the wrong people. Fedora and his coaches didn't commit the NCAA violations and neither did any of the players who played for UNC in 2012. This group had nothing to do with the whole sordid business that resulted in the bowl ban but they ultimately suffer the most from the penalty. I understand the need for the NCAA to punish UNC for major violations but that doesn't mean the players and coaches who ultimately must bear the weight of that discipline do so unfairly.

So if UNC wants to give them rings and honor their accomplishment, I have zero problem with it. The rings are for the players and about what they did on the field during the 2012 season. Besides, I consider any day were UNC does something to piss of NC State and Duke fans, a pretty good day.