This won't come as a galloping shock to anyone who has been watching or can read a box score. After a nice start which saw UNC climb as high as 16th in offensive efficiency in the KenPom rankings prior to the Tar Heels' win over Kentucky, the defense has slowly deteriorated.

Here is what UNC's offensive efficiency average has looked like over the past month. 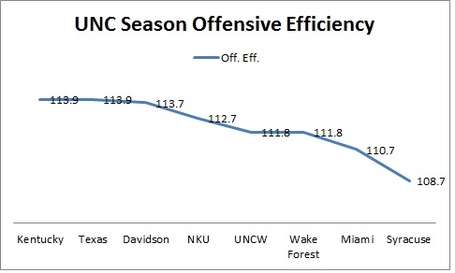 Note: These are snapshots of UNC's season OE taken prior to facing the opponent listed on the chart.

The slide is undeniable with a couple of pauses before really rolling downhill once ACC play started. For the record, here are the season defensive efficiency ratings for UNC opponents during this span at the time the teams played. 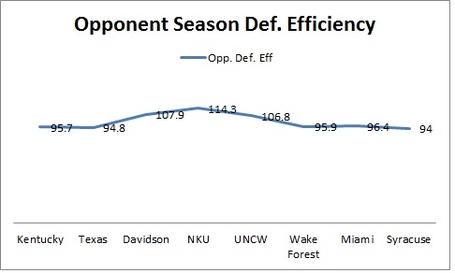 UNC hasn't necessarily faced a slew of great defensive teams and the two best ones(Kentucky and Texas) didn't necessarily result in a major decline in the numbers. UNC stayed at 113.9 after facing Kentucky and only dipped slightly to 113.7 after the Texas game. UNC actually took a bigger hit after playing Davidson and Northern Kentucky which likely resulted from them struggling offensively against badly rated defenses. Davidson had a DRtg of 107.9 and UNC only managed an ORtg of 110.4 in that game. Northern Kentucky was even worse with an DRtg of 114.3 but the Heels posted an ORtg of 104.7 in that game. Things were better versus UNCW but in the two ACC games the Tar Heels have had an offensive efficiency rating of 90 or worse.

If you are looking for reasons why, Mike DeCourcy at The Sporting News went for the good ol' "returning player ruined the chemistry" narrative saying that Leslie McDonald's return has been disruptive on the offensive end. UNC is 3-3 since McDonald returned from a nine game suspension. In the three losses, McDonald is shooting 28%. However Marcus Paige is actually shooting 25% in the three losses and to be fair the last two games are really driving those numbers down for both players. Against Texas, Paige and McDonald combined to hit nine threes in a game UNC lost by three and missed 24 free throws. It is really hard to pin that one on Paige and McDonald when there were other issues.

The other two losses, both in ACC play are a much different story lending some merit to DeCourcy's theory. In UNC's 0-2 start, there is a question regarding the quantity and quality of shots McDonald has taken. The fifth year senior has 25 attempts in 51 ACC minutes played. Against Wake Forest, McDonald had 13 FG attempts which led the team. On Wednesday night McDonald shot it 12 times which equaled James Michael McAdoo and was second to Paige who went 2-15.

The pertinent question however pertains to quality of the shots taken. If McDonald is taking good shots within the flow of the offense? If the answer is yes, the putting up 12.5 attempts in two games isn't necessarily the worst thing in the world given UNC's limited stable of shooters. If McDonald is forcing shots, disrupting the offense by trying to do too much and even taking shots away from others who might be in a better position to hit one, that is a major issue. That would also lead to concerns that UNC is depending far too much on jump shot and not aggressive play towards the basket. The decline in free throw rate in the first two ACC games could be a signal though the sample is still a tad small.

DeCourcy pointed out there was one instance where McDonald passed up a wide-open J.P. Tokoto to force a contested three. Brice Johnson did something similar, ignoring an open Kennedy Meeks to take a contested jumper in the lane. Those two examples and UNC's overall issue with turnovers in the past two games likely points to a team that simply isn't being effective in offensive execution, particularly with passing the ball and movement. Player motion and ball movement has been mentioned by more than one player since the Miami loss. It stands to reason that the issue is not just the shooting but the quality of the shots which simply haven't been as good. That was a notable difference in UNC's level of play between the first and second half against UNCW and it wouldn't be surprising if that is the case with the overall offensive malaise since McDonald's return.

There is a glimmer of hope in some of UNC's numbers. The offensive rebounding has been very good the past two games A continuation of that but with more second chances points off those boards would help the offense. Secondly, Paige(and to some extent McDonald) can't stay cold forever. For all the above analysis, it could very well come down to UNC's best player being in a serious slump that he will come out of at some point. No one knows when that will be but if UNC's "Ranked Team Game" theory holds true, it could be on Saturday.