Share All sharing options for: UNC Placed in Gainesville Regional With #2 Florida

The NCAA Baseball Tournament field was announced on Monday with UNC earning a bid for a 13th straight season. UNC will head to the Gainesville Regional to as the #3 seed in the regional. The Tar Heels will be joined there by the #2 overall seed Florida, #4 regional seed College of Charleston and #2 regional seed Long Beach State. The Heels face Long Beach State at 1:00 PM Friday. The game can be seen on ESPN3.

The Gainesville Regional is matched up against the Coral Gables Regional(with Miami as host) with the winner of each set to play each other in the Super Regional. 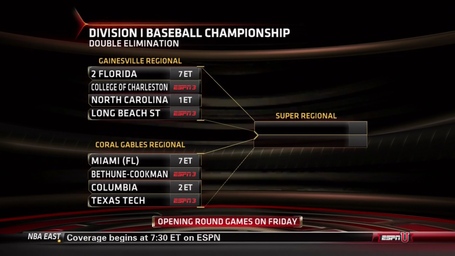 The ACC got seven total bids and two national seeds in Virginia(#3) and Florida State(#5). NC State, which started the season with hopes of a return trip to the College World Series and the recipient of an inordinate amount hype from the local media, did not make the field. Also missing from the field was Duke thanks in part to an RPI in the 80s. Duke swept UNC during the season.

Obviously UNC faces a very tough road if it has designs on returning to the College World Series. That being said, baseball is one of the ultimate "anything can happen" sports.